Another year, another Gamescom gone by… We were much more experienced and prepared this year. At first, we were supposed to go altogether as the main contributors to Lorekeeper but due to some unfortunate issues, only I and Burcu ended up participating. Nevertheless we saw new stuff, attended many meetings & presentations, and generally had so much fun. And here we are, conveying our thoughts to you. Without further ado, let’s get to what we experienced during Gamescom this year…

Last year, our stay in Germany was a bit too short; and this year’s was a bit too long. So if you are wondering, 2 days are not enough and 5 days are more than enough. Hopefully we’ll hit that sweet spot with 3 or 4 days next year and our stay will be just right.

As before, our article will focus more on our trip and fun stuff. So if you are expecting a more serious tone and detailed games news, there are none here. But you probably read about them somewhere else, so I don’t think it will be a problem. We will do something different this year, and Burcu and I will each write about the things we saw and experienced. To make things easier for you to follow, we will use different colors for ourselves. My parts will be the usual black and her parts will be blue. Well, if we covered that part, let’s get to what we did this year…

This time we made a change and instead of running to Blizzard’s booth, we went straight to play Gwent. Because… You know. Even if you are in the middle of an important quest to save your adopted daughter, you have to take a break and play a round of Gwent. So we asked ourselves “What would Geralt do?” and did just that! As a self-claimed expert on the subject, I must say this Gwent is nothing like the one in The Witcher 3. It is much more advanced, a ton more complicated and deep. I loved it! My usual tactic of “gather as many cards as you can on the first round with the use of spies” is not that easy to manage anymore. Burcu had a graveyard deck on her hand and nearly destroyed me with the cards she kept pulling from her graveyard. Nearly. Although I was the victorious one on the first match, she totally beat me on the second one. It will take some time to getting used to, but this new form and depth of Gwent is totally amazing. (DIY: Re-purpose your old warriors as more powerful zombies! -Burcu) 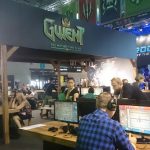 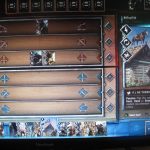 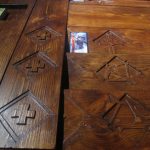 Blizzard was as usual. They welcomed us through the press entrance repeatedly. They even insisted that we should take a seat while waiting. Nice people. They had an awesomely decorated Diablo booth with a fireplace and comfy leather seats; but no new content. It was mostly the same for Hearthstone and World of Warcraft too. Starcraft 2 managed to get by with it’s new Commander for Co-Op. But the real stars of the show were Overwatch and Heroes of the Storm.

New Overwatch map was Eichenwald. It’s a huge castle on the outskirts of Germany with lots of tall walls to ambush the enemy from above. It was a blast to play, I didn’t even noticed how quickly time passed until the bottom of my screen flashed. Then of course, I noticed it was “high-noon” and unleashed my revolver on the enemy team. It’s always nice to get a team kill. Even if it’s in German. (Was it a Mittag then? -B)

On the other hand, Heroes of the Storm had 2 new maps and 2 new heroes –which were lots of new content. So we tried them all. Maps are great; they really captured the essence and feel of Starcraft perfectly. But that’s hardly a surprise since it’s the same team that created Starcraft. Zarya is great as a new ranged warrior. Whenever she has her shield on, getting attacked charges her energy and with more energy, her damage increases. When used right, she can be a dangerous foe. But the one I enjoyed much more was Alarak. He is a ruthless assassin with some great control abilities. You can push and pull enemies (and yourself) to choke points, wreak mayhem and even benefit from your reckless teammates that keep dying over and over. (Yes, there really is a talent for that: Whenever your teammates dies, you gain increased damage.) Although as much as I enjoyed playing Alarak, I wasn’t able to enjoy my team’s cooperation. There was a Raynor with 3K Hero Damage in a 20 minutes long match. Can you imagine? So yeah, we mostly lost. But it was still fun.

Oh, before finishing up the Blizzard portion, I must say the new statue of Varian was really phenomenal. We saluted him and mumbled Canticle of Sacrifice while wiping away the tears from our eyes. He will be missed… (Long live the ki… oh. 🙁 -B) (Well, we still have Anduin, right? –C) (Give my Varian back, Blizzard. Or give me that statue… Actually give them both, will you? –Ezgi) (Oh boy, it’s getting crowded in here! -C) 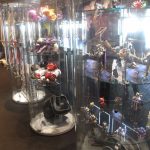 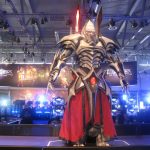 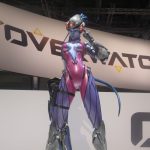 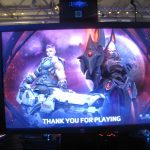 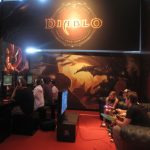 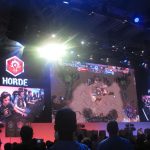 While Can was stopping by Turkey area (which was also a partner country this year!) to chat with some familiar faces, I had an appointment with Focus Interactive for Life is Strange’s developer Dontnod’s new game “Vampyr”. The name “Vampyr” may not thrill you at first. 2010’s adolescent sparkly vampires alienated most of us from the genre lately. But Vampyr is taking place in 20th century London and with a more Bram Stoker’s Dracula inspired atmosphere –which quickly picked up my interest. As you probably know, you’re playing a doctor who came back from the war recently and you find your town suffering from the Spanish plague. Best part is, you choose what kind of a doctor or vampire you want to be. It’s possible to finish the game without taking a single life, or going on a killing spree. No immortal NPC’s there to keep you from whatever it is that you want to do. But whatever you do, you will face the consequences: Every life you take gives you experience, so you get stronger by each life you take. On the other hand it takes you one step closer to hell, and it won’t be possible to change what you will have done up to that point by choosing the right dialog options at the end of the game. At least that’s what we have been promised; we’ll see if they are able to keep it.

We tried Sea of Pirates. It looks like “social” games will be on the rise in the near future. Even if you are the shy type, in order to control the ship properly, you have to communicate. If you don’t communicate, you won’t be going anywhere, so the game kind of “forces” you to interact with other players. And it works like a charm. We sailed and sank another ship. And then we caught them again and sank them before they even left the harbor. Just to do that, we shouted orders at each other, climbed rope ladders to scout, raised the sails, manned the guns etc… If you have 3 other friends to play with you, this will be immensely fun; you can take my word for it.

After Sea of Pirates, we kept wandering around for a bit, and then went straight to the Blizzard VIP area for our appointment. You can read the interview we had with Tom Chilton soon. (I’ll add a link here!)