Login or Sign Up
DREAMFALL CHAPTERS – REAL CHOICES AND ILLUSIONS

Dreamfall Chapters might be the only game I have been waiting for so many years. If you’ve played Dreamfall, you know how it ended with a cliffhanger; how it made you search around the forums, looking for the hopeful gossips of a continuation game. Then suddenly one day Kickstarter came and saved the day. So we will (hopefully) have the conclusion we have strived for. Some Kickstarter backers got angry when Red Thread Games announced they will release the game as five epsiodes (like many Tell Tale games actually), but I was okay with that. Hell, I would be okay if they just told me “Ragnar Tørnquist will tell the rest of the story through a Skype call”. I waited for this game even when there were no plans to make it happen; I think I can manage to live without it for a few more months.

Eventually, we got our Zoe, Kian and (last but not the least) Crow back. I feel like I have reunited with my old friends once again. Since people at Red Thread Games are developing the game faster than my pace of writing articles, by the time you are reading this article, we would be waiting for the third chapter. (I started writing it before the first chapter was released, lol) First two chapters “Reborn” and “Rebels” are already published and the choices we made are already haunting us. And by choices, I mean real decisions, not the illusions leading to same results no matter what you do. 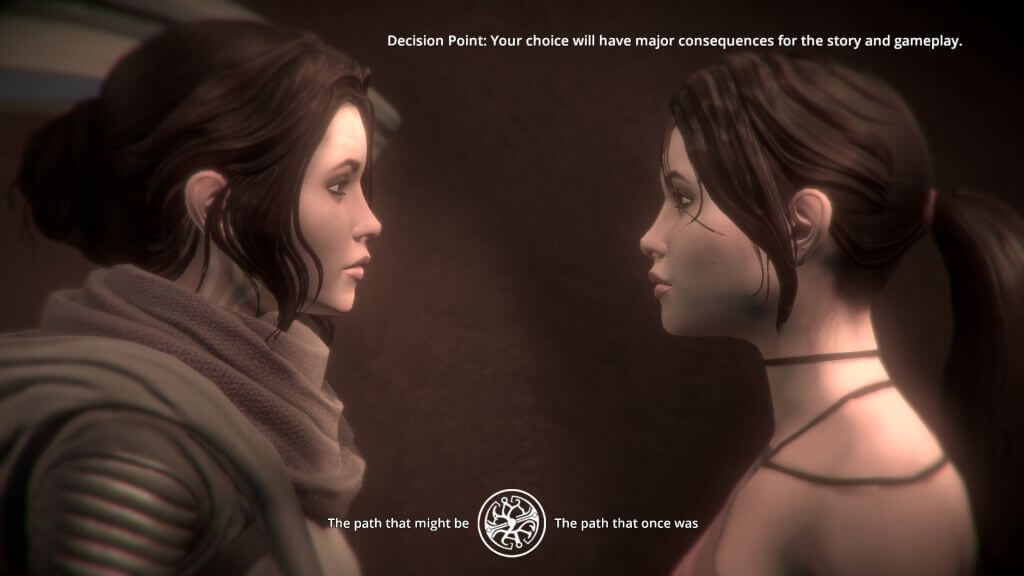 Since the topic is story driven episodic adventure games, a Tell Tale comparison is inevitable. Don’t get me wrong, I really like Tell Tale games and I have played almost all of them. I don’t mind if my choices don’t really make huge differences or if I’m not completely in control of the game, provided that the story is good enough. I’m also totally fine with watching an interactive movie. Even so, I would be lying if I said the hard choices and moral dilemmas of Dreamfall Chapters didn’t raise the bar for my expectations. The Bioware tactic of “choosing the most humanist, nicest choice to get the optimal outcome” does not work here. People die because you didn’t torture a man and you may get in trouble for just being honest with people. What I mean is that there are no good choices or bad choices in this game, there are just different options. No angelic or devilish characters, but real people who have to make difficult decisions. To make you completely paranoid, I have to tell you this: Your choices will haunt you in ways you cannot imagine. Trust me, they will.

I can openly say that thanks to these meaningful choices, I truly enjoyed the aspect of “role playing” that Dreamfall Chapters capture; something that many of the latest RPGs are missing. The dialogue system of the game is such an amazing work that not only adventure games but also modern RPGs should take as an example. I got really fond of it. Yes, let’s toss that old and tattered dialogue wheel out. Right now. But what is this dialogue system that I have been praising to the skies? Let me explain it this way: Different dialogue options -as is the custom with Dreamfall- are each summarized in one or two words. This is nothing new or different. But as we hover over to the option, we hear the character express their thoughts regarding that option. There! I am talking about this particular feature. It definitely gives more depth to the conversations when you “listen to” the thoughts of characters on why they want to say “that” instead of what they will actually say. It also gives a strong sense of reality as if you are actually thinking about your options before saying anything when the background gets blurred and time slows down (but doesn’t completely stop) as you go over the options and weigh up the character’s thoughts. 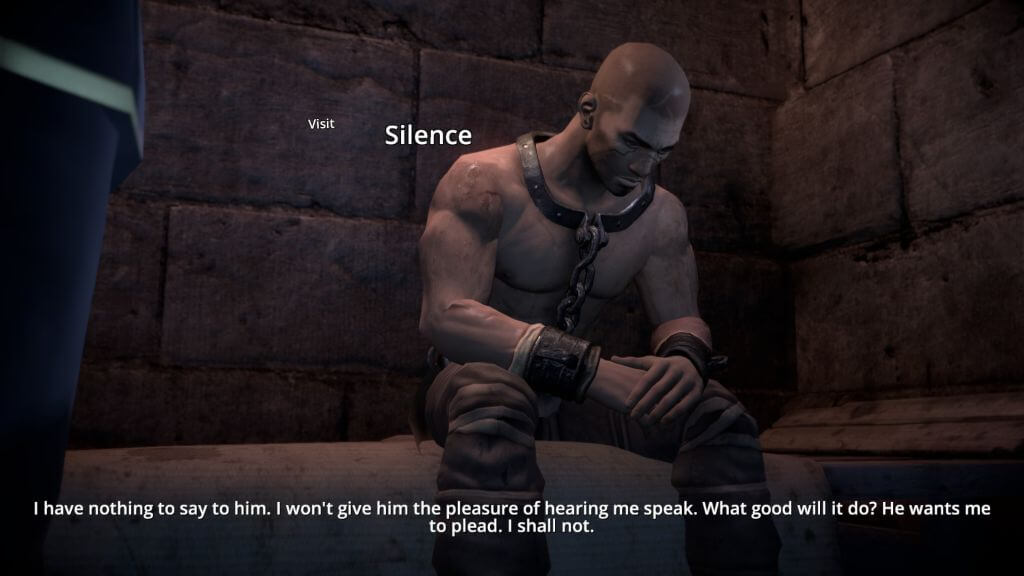 In a dialog that we choose not to speak a single word, we can still listen to the character’s thoughts on “why he doesn’t have anything to say,” for example. It is far better than clicking the option with three dots on it and wait meaninglessly, isn’t it? Moreover, all the choices make sense and they never make you think “This is not very appropriate to say right now.” Even when the options are poles apart, it is hard to mark any of them wrong thanks to the remarkably elaborated thoughts of characters. This is because all the options are spot-on and don’t run afoul of the situation the character is in. And when you add the complexity of the choices to that… I think I have never had to brood over how to respond to someone ever since Jaheira and Aerie asked “Which one of us do you love?” in Baldur’s Gate II. (Sorry, Jaheira; I see you only as a friend.)

Baldur’s Gate… All those companions and their personal quests… Catfights… Space hamsters and crazy rangers… I miss you, guys. I feel like a game is not complete without great NPCs. It is hard to feel a connection with the game world without them, no reason to do things right when the only consequence is the life of your not-so-interesting companion as you carry around piles of polygons. On the other hand, look at Enu. I would carry her on my back if I had to. 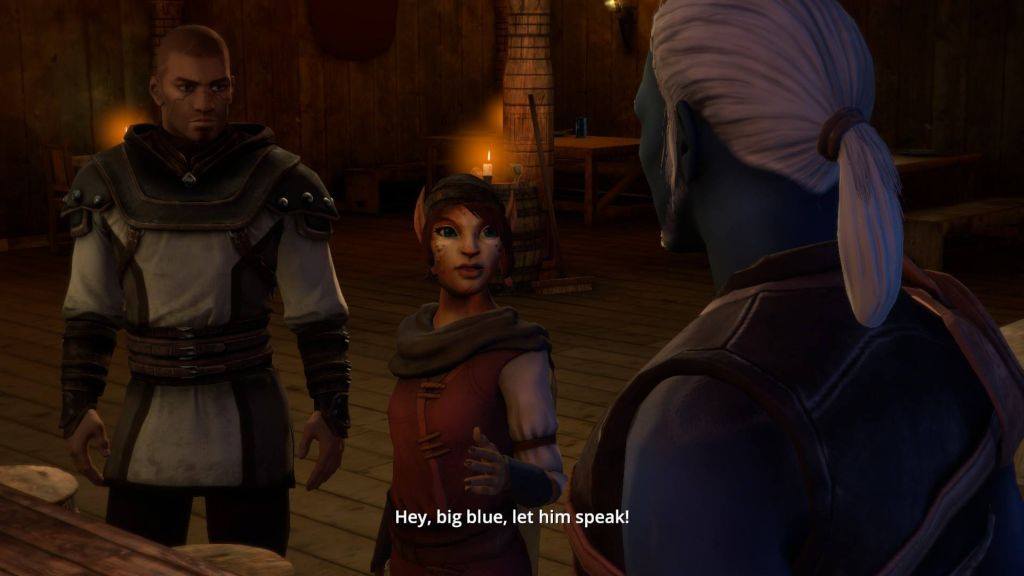 Talking a lot, blurting out things she’s not supposed to say, protecting us from Likho…
Enu is a good kitten. Ehm… Friend.

We have a longer playtime with Kian this time and it is really nice to see how much he has changed since Dreamfall. Since he grew up believing that magical beings were nothing more than worthless creatures instead of actual people, he used to suffer from the contradiction of what he saw and what he believed. Well, at least it was the case until he met April Ryan and she -not knowing who he was- told him everything she honestly thought about Azadi and how they treated the people of Marcuria. Now, he is trying to address his companions as “people” rather than “creatures”, and he is correcting himself a lot. (We know you find Zhids beatiful since Dreamfall, Kian. If you like her, go talk to her. Kienu fans have already started to invade the forums.)

One of my personal favorites is our friend Sully – whom we don’t carry around but visit a lot. He is a co-worker of Reza and a Turkish journalist; and he likes tucking in some Turkish words, especially when swearing. He calls Zoe “Fistik” (a slang for “beautiful girl” but Google will tell you it means peanut; don’t trust Google). As a Turk, it was funny for me to hear him using words like bok and kasar. His slight accent makes it even funnier. By the way, kasar means “bitch” but we would actually use “kaltak” in this context, which is the same thing but considered as a bigger insult. (Fun fact: Kasar is actually a kind of yellow cheese.) Nuances, guys. It’s important. I would gladly help you for Turkish translations, just ask. 😉 This paragraph has too many swear words right now, so I’ll stop it here. One last thing, since we talked about Turkish this much, I have to say the music in the Turkish market was spot-on. I wonder whose idea that was… 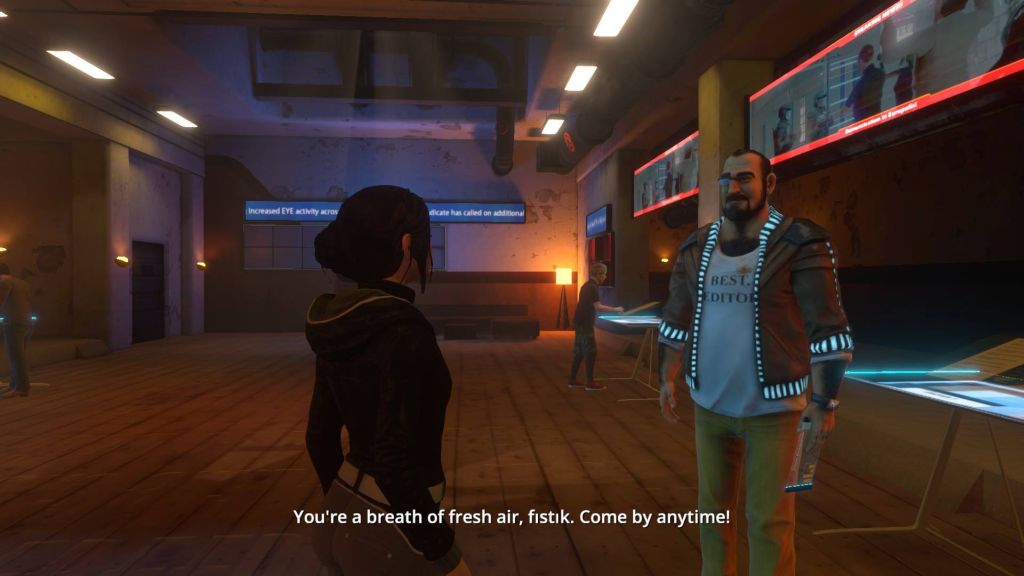 What was I saying? Yeah, characters. The Dolmari kid Bip – innocent enough to think the re-education camps are places to go to complete your education, but at the same time, cunning enough to shake off the Azadi guards anytime he wants… Angry Likho with his determination on seeing the worst in our actions… Mysterious woman Anna with all the theories on her real identity… The Mole with all her pain and anger… In short, there are a lot of intriguing characters to keep me interested and make me re-think the consequenses of my actions. The only missing thing is… Well if you have played the first chapter, then you know what is missing. And I hope we’ll get that back soon.

Adventurer. RPG fan. Enjoys exploring new worlds, solving puzzles and living the stories. Currently she is developing mobile apps and working on the tech side of Lorekeeper, while trying to squeeze in some articles between all the coding.

MALDRAXXUS, SHADOWLANDS AND BEYOND – INTERVIEW WITH STEVE DANUSER